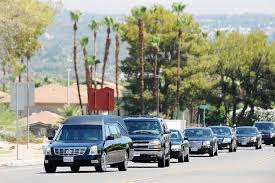 Ok, so funerals generally aren’t fun. That’s a given.

Although, most wakes I’ve been to have involved hanging out in the back of the room, catching up with old friends and swapping funny stories about the deceased so we don’t feel quite so bad.

Anyway, Mary and I went to a funeral for one of her Italian aunts or uncles (I can’t recall who it was) and afterward got in our cars and joined the procession. (You know funeral processions – the hearse leads the way, and the rest of the attendees follow each other in a line to the cemetery. Hopefully nobody cuts the line, but if they do you have to pay attention so you don’t lose track of where everyone is going.)

So we followed Mary’s parents to the entrance to the cemetery and on to the grave site, and parked our cars. As we got out, we noticed something a bit… different… from the mostly Italian funeral mass. All the people at the grave site were African American.

Somehow, Mary’s dad had lost our procession and joined somebody else’s.

We got back in our cars and returned* to the entrance, where we got the directions to the proper site (good thing we were at the right cemetery.)

Somebody has brought that incident up at every funeral since.

* UPDATE: Thanks to my brother Joe, who I forgot was also in our section of the procession:

“I (Joe) then took the lead and we stopped at a gas station to get directions, based on the memorial card I happened to have. We took a roundabout route but ended up arriving just when the ceremony at the grave started. They realized they had lost a few cars (I think 5) and so waited about 15 minutes, starting just when we pulled up.“