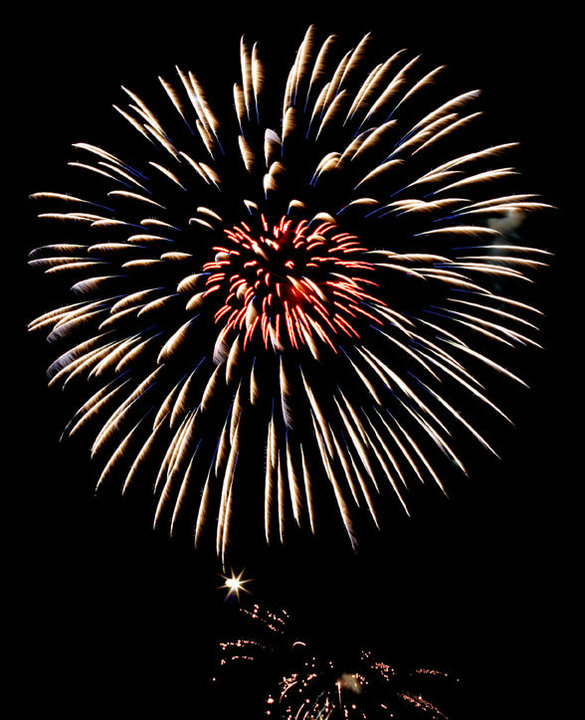 Since I posted about July 4th yesterday, I figured why not do it again today…

The first year we moved to Orlando we wanted to take the kids to see fireworks. Not being locals, though, we didn’t know where to go. (I suppose we could have asked someone, but we didn’t think of it until that morning.) After some discussion, we decided that Disney must have something going on so we headed over there.

One of the first things we did when we moved to Orlando was to buy annual passes to Disney. We were surprised to learn that the cost of the annual pass was not much higher than the cost of a five day pass, but unless you specifically ask them they won’t tell you that. Go, Disney.

As was our usual approach, we parked at one of the hotels for free and caught the boat over to the Magic Kingdom. Only the fireworks display was starting, so they made the boat wait for it.

It was the same fireworks show Disney did every other day of the year.

Oh well, we were already on the boat, so we headed across to the Magic Kingdom. Once there, we took the tram over the Epcot – our preferred of the two parks. (Animal Kingdom hadn’t yet been conceived, let alone built.)

We wandered around and went on a couple of rides, until the skies opened up and the rains started. We ducked into a ride to keep dry, and enjoyed Cranium Command for the first time. (A fun one, I wonder if they still have it?)

Once that ride was over, we realized that this wasn’t the typical Orlando mid-day rainstorm. We needed to make our way back to the tram to get to our car.

Orlando summer rain is a fairly standard thing. Somewhere around 2-3pm, it suddenly starts raining for 15 minutes or so and then the sun comes out again. At Disney, tourists duck into stores to buy ponchos while the locals just find somewhere to hole up until it’s done.

So we leapfrogged stores and rides, anything to keep out of the rain, until it finally stopped and we were able to go stand on the tram line. Now, a word about the Disney lines…

If there’s one thing Disney excels at, it’s line management. They work really hard on ride design and park layout to make any line seem like it’s only a few more minutes, no matter how long it actually is. They also do a great job putting attractions and displays to distract you from the fact that you’re even on a line.

The tram line? Not so much. That line was a snaking, twisted, Ellis-Island kind of sea of humanity. And it had absolutely no cover at all, which came into play as the skies once more opened up. We were quickly soaked through, and even though trams were appearing with regularity and the line moved quickly, it didn’t change the fact that everyone was completely wet.

We finally got on our tram, and as we pulled into the Magic Kingdom station the doors opened to reveal… a completely dry platform. It hadn’t rained there at all! And the otherwise dry folks waiting for the tram were confused as to why this tram-load of passengers looked like they had come from beneath the sea.

We made it back to the boat and back to our car. And found out later that the best place to see July 4th fireworks was from the parking garage roof next to my office.

Where you could see the fireworks displays from Sea World, Universal, and yes, Disney.