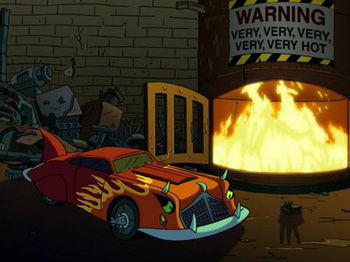 My brother in law Tom had a car we referred to as the AntiChrist.

It was a 1966 or 1967 Chevy Caprice Classic, and it seemed to love only him. Not that I’m claiming some sort of Stephen King Christine action here, it just seemed like it worked nicely for him and not for anyone else.

Not that it had cause to do otherwise…

When Tom bought the car he fixed it up and got it looking nearly mint. Then he lent it to his brother, who got in a bad wreck so Tom had to fix the car all over again. He was never too eager to lend it out again after that.

(I’m thinking that he did later on let his brother borrow it, and he got in another accident. But, I’m not entirely certain. Fact check, please?)

Apart from that, the car had certain… personality quirks. For one thing, the electrical system was a bit weird – the car wouldn’t start like a normal car would. You had to turn the key, then get out and pop the hood, and use a screwdriver on the starter to engage it. Tom had it down to a smooth operation, such that he made it look like the most natural thing in the world.

A funny side note… when my nephew TJ was little, he had his little plastic cars that he’d play with. He also had a plastic screwdriver that he’d use to “start” the plastic cars, because that’s what daddy did. I used to joke that when he got older he’d be amazed that some people were able to start their cars from inside without using a screwdriver. Progress!

I had the opportunity to drive the AntiChrist on more than one occasion. I’m not claiming supernatural influences, but it definitely seemed like it preferred that I leave it as quickly as possible.

I wonder if Tom still has that car?

Editor’s note: I coined the name “AntiChrist” from the movie The Gods Must Be Crazy, where the mechanic called his jeep that after all the trouble it gave.

2 thoughts on “The Antichrist”