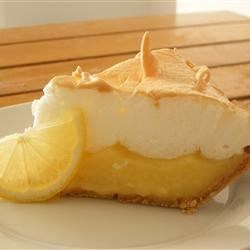 I did a bit of baking last weekend, some chocolate chocolate chip cookies and four kinds of biscotti. I’m a decent baker these days, and can make a good biscotti.

But that reminded me of my first attempt at baking.

When I was a kid, my sisters Helen and Debbie decided to try making a lemon meringue pie. (OK, Helen decided to try, and we were her assistants.) We were all kids at that point, and untrained in the ways of the kitchen.

So we broke out the Betty Crocker cookbook and looked up the recipe. Sugar, yes. (What kid doesn’t know sugar?) Eggs, yeah we knew how to crack those. Salt, water, cornstarch, flour, shortening, butter, lemons…

We had no idea what that was, and Betty Crocker gave us no hint of what it might be either. Sure, I know what it is now, but then…

We had no idea.

So we had a pie crust filled with lemon stuff, and we were stumped on the meringue.

In a burst of brilliance, I recalled that we often had fish sticks for dinner, and they came with something called tartar sauce. Maybe that was it?

Yes, that was it!

So we proceeded with the recipe, using tartar sauce in place of the cream of tartar. And we made a shocking discovery.

Tartar sauce is NOT cream of tartar.

Not even a little bit.

I won’t go into detail about the crime against humanity that was our “meringue,” but let’s just say we determined rather quickly that the whole attempt was ruined.

So we gave it to the dog, who was an eating machine.

He wouldn’t eat it.

And I didn’t blame him either.

To this day I still love lemon meringue pie. But I don’t care for tartar sauce.