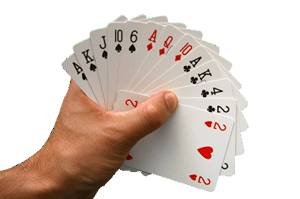 Gary was an all-star sales rep and a brilliant if somewhat unorthodox person. Over the years he came up with some great ideas, and some not-so-great. (One of the latter that comes to mind is an ad piece he created as marketing manager for a tax textbook. Designed to mimic a 1040 form, it looked marvelous. EXCEPT… he mailed them out during tax season and many people tossed them, thinking they were actual 1040s.)

Anyway, so one day Gary pokes his head in my office and asks if I knew how to play bridge. Now I’d played spades during college and thought myself a pretty talented player, but I told him bridge was something I’d never tried. He left and shortly returned with a hand-written cheat sheet and a 3.5″ disk. (Hey, this was around 1990 or so.) The sheet had basic instructions on bidding and how points worked, and the disk had a bridge game on it. “Learn this,” he said.

(For the uninitiated, bridge is a complex game with two essential parts. There’s the bidding, a complicated dance whereby the players try to tell their partner what their hands look like and how many tricks they think they can make. It’s also where the contract is determined and trump is set. Then comes the play, where each player plays a card and high card (or high trump) wins the trick. The play is somewhat like spades, except that anything (or nothing) can be trump.)

Fast forward a week, and Gary pops in once again at lunchtime to summon me to my first bridge game. It was Gary and me vs two very smart development editors, Joyce and …Steve? (I think that was his name.) Now Gary was a Stanford grad, and Joyce and Steve were also very bright. Plus, they all had been playing bridge for longer than a few days and with live people, even.

So, the cards got dealt in my first game. I count up my points and bid 1 NT. (I was trying to say I had a decent hand of 14-16 points.) I forget the progression of bids, but Gary and I danced back and forth until Gary set the contract at 7NT. Again, for the uninitiated, 7NT is the highest bid you can make. We were saying, essentially, that we would win every single trick and we wouldn’t need to have any trump to do it.

Since I was the first to bid NT, I got to hold my hand and play it, and Gary’s would be laid out for all to see. (I would play that as well.)

Now, I’d done a bit of reading about bridge and had practiced on the computer game. I was not prepared, however, for Gary to leave me alone to play the hand while he made a phone call. Nor was I prepared for Joyce and Steve to immediately start heckling me. 🙁

I sat and stared at the cards for ten minutes, trying to work out how the heck I was going to pull this off. Finally, after laughs by all, I laid my first card and took the trick. I took the next. Back and forth, the lead shifted between my hand and the board (Gary’s.) Lo and behold, when the dust settled, I’d managed to take every trick.

The players congratulated me on my play, and Gary finally said something encouraging about it. We played lots of times, but never again have I had to play a 7NT contract.

And never again under such relentless heckling.