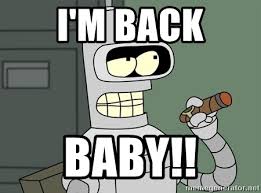 I’ve been out of sorts for a while now, and I finally figured it out this afternoon.

Back in early July, I finally finished the first draft of my debut novel. Based on guidance from the writer’s groups I joined, the next step is to leave it be for a while (weeks? months?) to flush it completely out of your system before you begin your first round of editing.

So I left it be. But I’d been writing every day for months at that point, and suddenly I was bereft of what had become a regular and enjoyable habit. So I decided to try my hand at short stories again.

That didn’t work out very well, because I’d get an interesting idea and stall halfway through. I have a half dozen such unfinished masterpieces, ranging from several pages to a mere paragraph. I did manage to finally finish one about six weeks ago, but so far have been unable to get it published.

Slowly I lost the writing habit, and I didn’t even notice it.

At my office a pair of us volunteered to create a newsletter for our department. My partner found a suitable template and I drafted a bunch of HR-friendly questions for an interview, and we chatted with the department administrator. Her written answers were quite terse, but the subsequent conversation about her answers were replete with imagery and fun. She told some great stories.

Having finally resolved a thorny and stressful issue, I decided to cleanse my mind with the lighter task of writing up the interview for our newsletter. With her brief written answers in front of me and the echoes of her joyful recollections in my head, I put pen to paper (or rather, fingers to keyboard) and crafted her tale.

Those who read that first draft loved it, and my partner suggested some other bits for the newsletter which I also crafted. It seemed that the words were flowing, easily and with gusto.

I found an empty place that I didn’t know was there – the simple joy of writing.

So tonight I only watched one episode of Doctor Who after dinner, and spent some time wrestling one of my half-finished short stories into shape. I don’t know if it will get published, but I feel a lot better for having finished it.