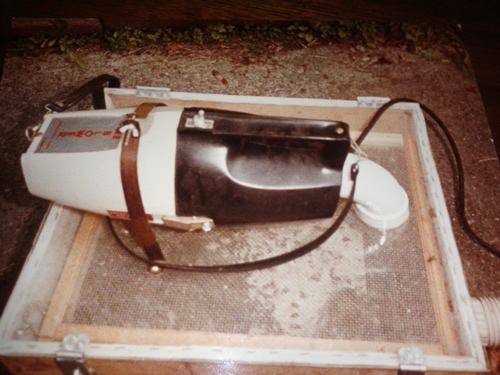 We owned a two-family house with my sister Helen. It was built in 1900 or so, and so we always seemed to have something that needed fixing or improving.

One Spring weekend we arranged to have new windows installed, so the workmen showed up bright and early and started pulling the existing windows out. They had a half dozen removed, when suddenly a swarm of bees appeared out of nowhere and settled in one of our trees.

The tree was maybe eight feet away from the missing windows.

Most of the bees clustered on the tree, but many buzzed around harassing anybody standing in our driveway or backyard. So, the workers couldn’t work. And the giant holes in our house remained giant holes.

So naturally we called an exterminator, and he quickly told us they were honeybees and it was illegal for him to do anything. He referred us to another guy, who showed up in a van with a weird vacuum and stuff.

He doffed a headnet and proceeded to suck up all the bees from the swarm.

Once he’d gotten most of the bees (including the queen) he put the container in his van and drove off. There were bees flying around inside his van, but he didn’t seem to care about that. (Probably because, after charging us to capture the swarm and take them away, then he later sold the swarm to somebody else to raise. A nice racket, if you can stand the buzzing.)

P.S. No bees in the house, and we did get the windows installed.