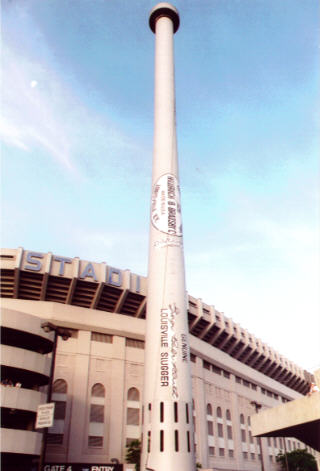 On August 22, 1976 I went to a baseball game at Yankee Stadium with my siblings Joe and Debbie. It was Bat Day at Yankee Stadium, and so we each got a bat to take home. They had some player’s “autograph” on it, as well as some corporate logo (I’m thinking maybe Burger King, but that might have been another year.)

Anyway, we were playing the California Angels that day and they had fireballer Frank Tanana on the mound. He handled us quite easily, and meanwhile the Angels beat up on Catfish Hunter and a very young Ron Guidry in relief.

As we headed into the bottom of the ninth with the Angels leading 8-0, people started heading out — to beat the traffic, I guess. I remember Debbie and I saying that they shouldn’t leave, because even though we only had two hits so far you never know what will happen.

Boy were we right about that.

After Thurman Munson grounded out, Sweet Lou Piniella singled and Chris Chambliss doubled him to third. Graig Nettles singled Lou home to get us on the board. After a walk and a single, Willie Randolph doubled to make it 8-4 and chase Tanana. Carlos May singled in another run, and Roy White homered to tie the game 8-8!

I remember shouting and cheering like crazy, along with the remnants of the crowd that decided to wait it out like us. It almost didn’t matter that the Angels scratched out three in the 11th to win the game.

I learned a valuable baseball lesson that day… Never Say Die! (And don’t leave until it’s over.)