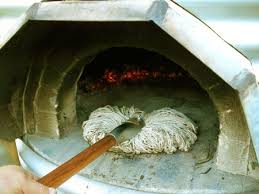 He was a big goofball, but a lot of laughs. She dated him for a while, and my sister Debbie and I became friendly with him so that, on occasion, we would all head out someplace for the evening.

So one time we were out doing whatever (I think a movie, maybe) and were feeling a bit hungry, so Anthony decided to go to a pizzeria he liked. It was late, but he was sure they’d still be open.

So we walk into the pizzeria to see the guy shoving a mop into the oven.

He looks at us, removes the dingy mop, and sticks it back in the pail of black disgusting water. Then he turns to us and says, “Whadaya want?”

OK, it’s not easy trying to type a Bronx accent phonetically. You try it.

We all looked at each other, and for some God-awful reason decided to order pizza. And yes, he took the slices and slid them into that very same oven that, moments before, he’d been mopping.

In fact, he kept up with that joke for the duration of their dating. (Including rewording an electronic music hit “Pop Music” to “Mop Pizza.”) Maybe that’s why they broke it off?