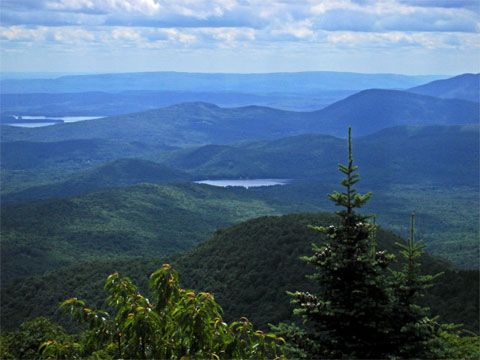 My college friend Dave’s family owned a small cabin on some land up in Sullivan county in New York State, and he used to spend mini-vacations up there from time to time. A few of those times he invited me to go with him.

The drive to get there was long, and eventually we went from major interstates to state highways to state roads surrounded by forests. Eventually, by some landmark I never caught, Dave would suddenly turn off the lonely road into a small opening in the trees (like Batman pulling into his Bat Cave) and we’d crawl down the dirt driveway to the cabin tucked back away from the road.

It was a great place to commune with nature. There was a garden his dad had built, complete with hot peppers that nobody could eat (except his dad and me), a brick barbecue grill, and a bocci court. (Yes, all the important stuff any good Italian would need.)

And a couple hundred yards behind the cabin was The Mountain.

OK, it wasn’t a real mountain, more like a big hill. But it had something like a 60 degree grade and took some doing to climb, and at the top you were clearly at the highest point within sight. A breathtaking view, and the photo above is a poor substitute for the real thing.

Of course, a 60 degree climb is far easier to handle than a 60 degree drop. Going down was a challenge, and we handled it the only two ways you could. For Dave it meant running down as fast as you could, and when he felt like he was going too fast he’d grab onto a tree to stop. For me, as I didn’t trust myself not to wipe out at the first tree, I took a safer if less dignified approach – I sat on my ass and slid down.

Either way it was fun.

We had lots of interesting adventures up there. On one occasion, I recall grilling a package of hotdogs and getting concerned that they were getting overdone. As I took the first one off the grill, which was balanced over the fire, I upset the balance and caused the remaining hot dogs to tip over into the flames. They all ended up overdone, and we laughed about that for hours.

Another time Mary accompanied us, and while she was napping in the cabin Dave and I went out to attend to our ritual of chopping down a dead tree and building a campfire. Unfortunately, one of my swings hit a knot and the axe bounced back awkwardly and hit my shin. Dave pointed out, “Hey, you cut your jeans.” I looked down, and saw blood through the inch-long slice.

Turned out I had axed my pants and my leg. Dave, of course, was excited that he finally had an opportunity to use the first aid kit they had in the cabin, and proceeded to doctor me up. Barring anything to actually stitch up the wound, we decided to tape it together instead. That didn’t work very well.

And then I had to tell Mary what I’d done. 🙁

The repair wasn’t the greatest, and for weeks afterward I had bits of white tape stuck to the hairs on my leg.

I was a great cabin, though, and I miss the fun times we had communing with nature.

1 thought on “Cabin Under The Hill”