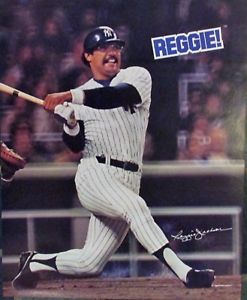 As usual we packed a bagged lunch, hopped the subway, and bought outfield upper deck seats for a game against the White Sox. As we entered the Stadium, we were each handed a small, square chocolate bar.

A Reggie bar, to be exact.

During the offseason following the 1976 World Series, Reggie famously exclaimed that if he signed in New York they’d name a candy bar after him. Well, he did sign in New York. And I was holding his candy bar in my hands.

They raised the flag for their 1977 World Series win over the Dodgers, reminding the fans of the heroics of that great series.

Editor’s Note: One highlight of the 1977 World Series was Reggie clubbing three homers on three consecutive swings in Game 6. What’s not recalled is that he also homered on his last swing in Game 5.

So the game starts, and Wilbur Wood is on the mound for the Sox. Reggie comes up, to thundering applause, and with two men on base powers a homerun. (That’s five consecutive at bats ending in a homerun, counting the post-season.)

And the adoring fans respond by chucking their Reggie Bars onto the field.

Twenty minutes later, the grounds crew is still picking up the damned candy bars. Andrew and I kept ours, because we didn’t have any money for concessions and knew we’d be hungry later.

I remember we didn’t much care for the candy bar. But we enjoyed the game!

Editor’s Note: Ron Guidry pitched the Yanks to a 4-2 win.