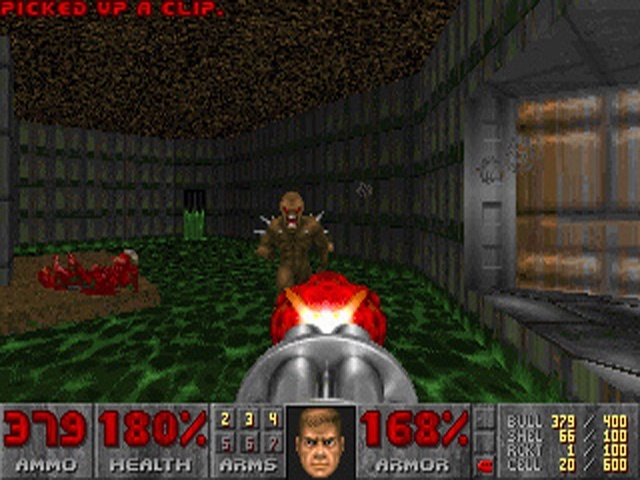 Back when I was with Harcourt in Orlando, first-person shooters were a big thing. Someone brought one to work one day, and pretty soon several of us were whiling away our lunchtimes blasting monsters. (I think it was Doom, but it was definitely an Id game.)

Then we discovered that the game could be played over a network in cooperative mode, and that opened up new possibilities. We assumed the game chewed up network bandwidth (it did) and that meant if we networked it would have to be after hours. But we still might get in trouble, unless…

Somebody (I think maybe it was me?) suggested that instead of trying to get around the network manager we get him to play with us. So Phil became the newest member of our playgroup.

We convened one day after 5pm. Everyone sat at their own computer, spread out across our office floor, and jumped on a conference call so we could communicate better. Most of us had already played level one, but this was Phil’s first time so we helped him along. Until we came to the Red Key room.

Now, this was a tricky place. It was a large empty room with nothing but a single red key sitting in its middle, which you’ll need for something later on. We knew that when you touched the key, hidden doors open on either side of the room revealing a bunch of monsters while the front door slams shut for a full minute. So we positioned Phil next to the key and took up positions next to the hidden doors. (Our idea was to pick off the monsters as they entered through those doors.)

Everyone got in position, and we gave the final command:

All hell broke loose. I quickly found that I was not near the hidden door but right in front of it, and was blasted before I could do anything. Rick fired a bazooka but aimed too close to the wall and blew himself up. Mickey was overwhelmed as well, and all three of us rematerialized at the starting point – outside the room, which was now locked.

Locked out and unable to do anything, all we could hear was Phil sputtering and shooting and cursing (and us, laughing hysterically.) The door eventually opened and we were able to continue the game.

It was a very long time before any of us could mention the red key without laughing. I still can’t, and I’ll bet Phil can’t either.