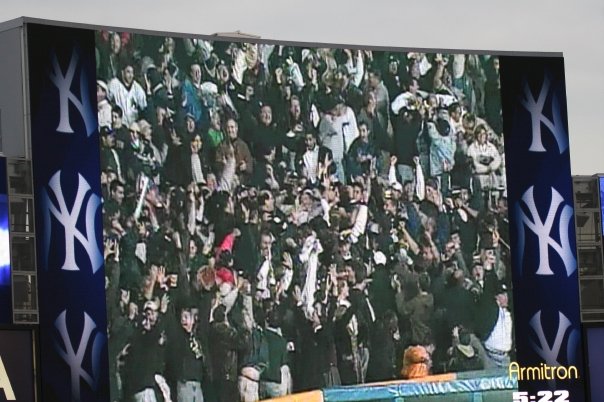 In 1976, Chris Chambliss hit a home run in the bottom of the ninth in game 5 to win the American League pennant. My brother Joe and I decided we’d try to get World Series tickets. So the next day, we headed down to Yankee Stadium to stand on a long line. A lot of waiting, some running, and a car accident later, we headed home with no tickets.

Fast forward to 1996. Joe has season’s tickets, and has purchased a pair of World Series tickets for Game 7 at Yankee Stadium. The Yanks beat the Braves in six games.

In 1998, Joe again got World Series tickets for Game 6. Yanks beat the Padres in four.

In 1999, Joe got tickets for Game 5. Yanks beat the Braves in four. This one was especially tough, since in Game 3 the Braves were winning. If they won that game, we’d definitely be going to the World Series. When the Yanks fought back to tie then go ahead, we only tepidly cheered them on.

In 2000, Joe got tickets for Game 6. Guess what happened? Go ahead, guess! Yanks over the Mets in five.

So, you can imagine that I thought we’d never see a World Series game.

I was living in Texas at this point, and coming back to NYC in late October was weird that soon after 9-11. Of course, Joe had gotten tickets again for Game 5 so I came home.

Arizona won the first game. They won the second game. When the Yanks won the third game, we realized that finally, FINALLY, we’d get to actually use those Game 5 tickets and SEE A WORLD SERIES GAME.

Game 4, of course, went Arizona’s way until Tino Martinez hit a 2-run homer off closer Byung Hyun Kim to tie it up in the bottom of the ninth. As the clock passed midnight, Derek Jeter homered off Kim in the tenth to win the game.

It was November 1, and our time had finally come.

Our seats were in left field a few rows back of the fence. If you look at the picture above, there’s a sea of Yankee dark blue and a lone splash of lighter blue in the top left corner – that’s me.

The game didn’t begin well, with Arizona jumping out to an early lead. We fought back, but went into the ninth inning down by two runs.

Guys in front of us packed up their stuff and headed for the exit. “You don’t leave until it’s over!” I yelled. (Remember Bat Day?)

Arizona brought in Kim, again. Posada led off with a double. Spencer grounded out, one down. Knoblauch struck out, two down.

Joe turns to me and says, “We got him where we want him!”

The next batter, Scott Brosius, hit a 1-0 pitch deep to left field… deep… and it landed ten feet in front of us to tie the game!

It went back and forth for a bit as the clock struck midnight. Joe turned to me and wished me a happy birthday. “You know what I want,” I said.

And in the bottom of the twelfth inning, Soriano singled to drive in Knoblauch and give me what I wanted – a Yankees win.

It’s the only World Series game I’ve ever attended. It was a long time coming, but a great experience.