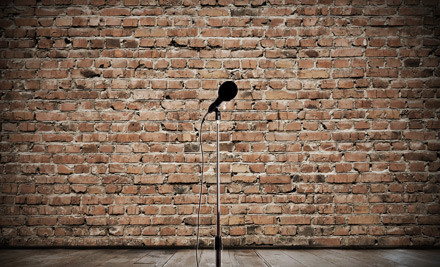 I’ve had to do presentations at a variety of company meetings and events. Whether the audience consists of a handful or a roomful, I’ve pretty much held my own with perhaps equal portions of wit and wisdom.

Presenting when friends are in the audience is especially challenging, particularly when they decide to try to ask reasonable-sounding questions designed to make you laugh at some private joke. I’m looking at you, Ostrow!

So my company used to hold an annual IT conference to discuss topics related to our network infrastructure. (For the faint of heart, that’s the last bit of tech talk in this story.) We invited several dozen IT employees from the business units around the country to converge on our corporate headquarters in Orlando, where we’d cover a variety of topics over several days. There was usually a sponsored evening of entertainment (such as a Disney World free for all) and a final night soiree (typically we invaded a local bar and took over the stage with our many musicians, of which I was one.)

So, one particular year I begged out of the evening of entertainment (sleep? TV show? apathy? Who can recall?) and showed up the next morning, prepared to make my own presentation.

There was a delay of a few minutes while the techs were getting my laptop to present the slides. So, to break the ice a bit (and knowing more than half the attendees had flown in from the various company locations), I innocently asked, “So, is anybody here from out of town?”

There was a loud round of laughing. I mean, REALLY loud. Like, “the funniest joke on Earth” type loud.

So I got down to my presentation and it went pretty well. Afterward, I mentioned the unexpected reaction to my throwaway comment, and got the real scoop.

Apparently, the previous night’s entertainment was a comedy club where they’d hired some comic to do his schtick. He opened with, “So, is anybody here from out of town?”

He then proceeded to insult various meeting attendees with unfunny stereotypes and just bad humor. One of our senior folk attempted to take control of the situation and things spiraled out of control. Finally, somebody managed to shut the comic down who, despite his bombed material, managed to somewhat amuse everyone with just how bad his performance was.

Which was what my innocent comment reminded everyone of.

The network VP wondered aloud if they shouldn’t sign me up to do comedy the next year.