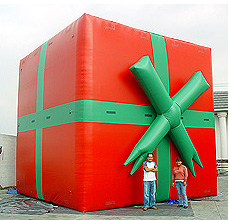 When you live near both sets of families, there’s plenty of Christmas traditions and activities to keep you busy. When you’ve moved a thousand of miles away, though, that’s when you have to get a little creative.

When we first moved to Texas, we still had a console TV. (You remember those, a “big” picture tube embedded in a stylized wooden furniture looking thing.) Well, it wasn’t working too well and Mary wanted a new one. So, one evening on my way home from work I stopped by the store and bought a brand new 32″ TV. (Don’t laugh, that was good stuff back then.) I then pulled into the garage and somehow managed to unload the giant box, covering it with various and sundry crap from elsewhere in the garage to camouflage it.

This worked so well that Mary went into the garage repeatedly over the next week without even noticing it was out there.

Then a few days before Christmas I set up a scavenger hunt for her gifts. I took a bunch of little things I’d picked up for her and hid them around the house – in a closet, in the freezer, on a shelf – along with clues with each one, directing her to the next. At any point if she stumbled on one of them she would have found the lot, but she didn’t.

And I didn’t exactly hide them, either.

Husband comment: “I guess I’m not the only one who can be clueless from time to time,” he said, as he made his bed on the couch…

Anyway, Christmas came and I presented her with the first clue, which led to the next clue and the next, which eventually led to the garage where she found the TV.

And, of course, in the classic end-of-life act for any console TV, we put the new TV on top of the console one.

The kids enjoyed the idea of the scavenger hunt so much that next year, when Diane was still pre-high school and Natalie even younger, I brought it out again – this time for them. I had been reading the Hobbit with them, so I tried to pattern my clues as riddles.

In fact I cribbed one from Tolkein himself, the only one I recall: “A box without hinges, key, or lid, yet golden treasure inside is hid.” “Eggses!” they yelled out, and sure enough the next clue was in the refrigerator in the egg carton.

Still, the clues were a challenge to find something that both girls could figure out. And, of course, they got each one of them and found all their gifts.

I miss those days. Maybe next year I’ll try this again.