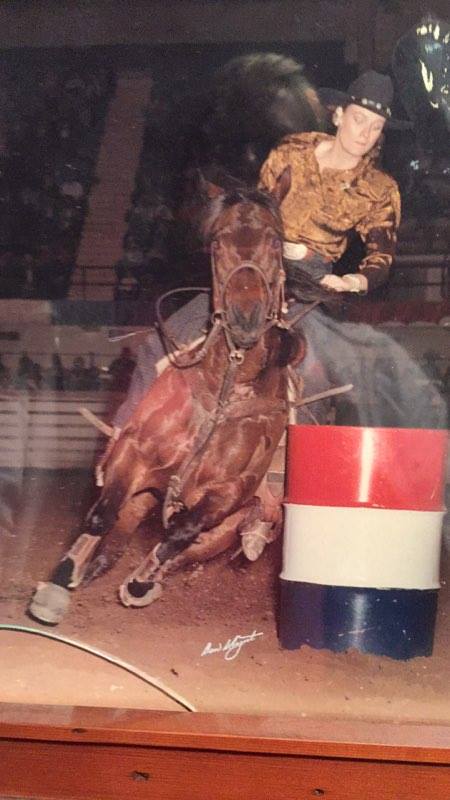 I was living in Orlando and had a work trip to Fort Worth. My friend Susan, who lived in Fort Worth, invited me to check out her barrel horse Brownie, so we headed out to the stable where she boarded him.

Now, in case you don’t know, a barrel horse is a particular kind of horse. They compete in rodeo arenas where they run around a series of barrels, cutting their turns as sharply as possible, then explode past the barrel towards the next one. So, they’re typically strong with explosive speed, and Brownie had won quite a few of these events.

We show up at the stable and Susan takes him out for a few minutes, just a nice slow trot around the fenced-in area to get him warmed up. Then she brings him over to me, asking if I wanted to try to ride him.

Now I’ve been on horses before, of course. Granted I’d grown up in the Bronx where there weren’t a lot of horse opportunities, but I’d been trail riding a few times.

(Editor’s note: Trail horses are not real horses. They’re old horses with training wheels, carousel horses that smell and have bad attitudes because they used to be real horses and remember that.)

Susan gave me a rundown on how to operate a horse – how to sit, how to stop, how to turn. “Yeah yeah yeah, I got this,” I must have said. Then I mounted up and we started walking.

After a minute or so, I thought “This isn’t so bad. Let’s see if we can shift into 2nd gear…”

(Editor’s note: At this time Rudy does NOT know any more about driving a stick shift than he knows about horses.)

So I think back to my trail horse days, and give the reins a little shake. Nothing happens. So, I give him a little kick…

I asked later what a horse’s different speeds are called. First there’s the Walk, then the Trot, then the Jog, then the Canter, then the Gallop. And then there’s Ludicrous Speed, which is what Brownie exploded into, making a bee-line the long way down the arena.

Everything Susan told me about stopping flew right out of my head, and all I could do was hold on for dear life. He ran straight for the end zone, took a quick left (thank God), and another left to start back towards the stable. At this point I notice Susan jumping up and down waving at Brownie, and I’m thinking I’m going to die.

(Editor’s note: Susan, on the other hand, is thinking, “OMG I gotta tell Mary that I killed Rudy!”)

Susan calmed down Brownie with a brushing, and we adjourned to a nearby Mexican restaurant where I made two margueritas disappear without tasting them.

I haven’t been on a horse since.

(Editor’s note: Brownie was fine, although from that day Susan referred to him as “Killer.”)