I’ve been to Las Vegas maybe twenty times or so, but they weren’t your typical Vegas trips. I have in-laws living there, so it was never “Oooh, let’s hit Vegas baby!” but more like “Let’s go visit the family.” Still, we had our share of fun adventures there…

So one year back in the 90s Mary and I got tickets for COMDEX, the big annual computer show. It was huge, with vendor booths spread out over a dozen different hotels. (If you physically spent 5 seconds at each booth, there wouldn’t be enough time in the week-long event to visit all the booths!) So we hit all the vendors I’d wanted to talk with, and had some time left over on the last day, so we decided to just wander around and see what freebies we could collect. (Stuffed animals, key chains, etc.)

I spied a old-fashioned hot-air popcorn machine. We strolled up to get some, and the person told us we’d have to watch the presentation about to begin. We’re hungry, so we sit down. (I have no recollection what the presentation was about…) They pass around cards for our names and contact info, so we filled them out. (Hey, the 90s were a happier, carefree time.) After the presentation finished, we jumped up to get popcorn when I suddenly hear my name being called out – we won tickets to see Siegfried and Roy!

So later that night, we’re at the hotel to see the show. Now, picture this: there are rows of seats like in any theater, maybe 200 person capacity. The stage is shaped like Robin’s mask, with maybe another 30 seats in each eye hole. So, basically, we’re IN the stage. 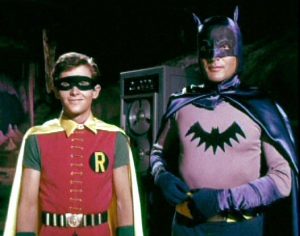 So, the show started and S&R were in rare form, with the magic and animals and whatnot. At one point they closed the curtains behind them to talk with the audience. They called a woman up to the stage and interviewed her. Standing between them, facing the audience, she doesn’t notice the platform behind her with the white tiger on it. Not even when they ask her to spin around (which she does facing the floor.) She finally notices the tiger and, naturally, screams. (Is that a good idea to scream at a wild animal?)

For the finale, they announced that they would make a full-grown elephant disappear. They lead her out on stage and parade her around the figure eight. (I knew it was a “her” because she urinated the entire time, drawing her own “8” on the stage.) Finally they positioned her near us, facing away, so we got a great view of a giant quivering elephant butt, to which I yelled “Make it disappear! Make it disappear!”

Thankfully, the elephant vanished without her own “encore.”

Right at the end, all the ushers knelt throughout the stage sections we were in. Siegfried and Roy said their good nights, and the ushers all stood at once and started applauding – causing the others in our section to stand, which caused the rest of the audience to stand. A standing ovation every show! Amazing!

It was a very enjoyable evening.

And all we wanted was some popcorn.