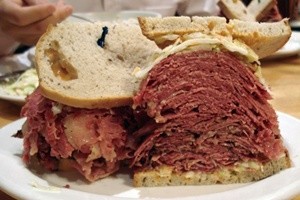 After getting downsized from Thompson, I formed a startup with Harcourt coworkers Brian and Jack. We named our company Smartacus, and we would focus on educational software.

Shortly after its inception, we scheduled a sales trip to the major college textbook publishing companies in NYC and Boston. That meant a road trip for us, so we rented a van and set out with our hopes and a couple of decks of cards.

One of our first stops was with McGraw Hill in midtown New York City. We had a 1pm appointment with Ed, a McGraw Hill president whom I worked for back in my Prentice Hall days. We bused in from New Jersey earlier that morning, so with some time to kill we decided on a restaurant across the street from their office.

Now, I recall years before when Jack had invited me to lunch at a Fort Worth institution, the Swiss Pastry Shop. SPS had a nice bakery selection, as the owner used to be pastry chef for a big local country club. They also had some very nice lunch choices, and I tried their pastrami sandwich. It was maybe an inch or so thick and tasted ok.

So, we take a table in the Stage Door Deli and look over the menu. Once again I pick the pastrami sandwich, I think Brian order the same and Jack got a reuben. When the sandwiches came out, they were flabbergasted. Four inches thick of meat, outstanding pickles, just an all-around amazing sandwich. They couldn’t believe what they were eating.

It put us in a great mood for our meeting with Ed, who sat there and speculated about where he thought the industry was heading and the disruptive forces he saw on the horizon. We had to fight to keep our mouths closed, because he basically was quoting from our business plan.

Oh, what might have been… As it turned out, while we were in business for quite a while we never really got the traction we needed. Under-capitalization is a death knell to business…

The trip continued with other meetings in NYC and Boston, and we got mixed results from it. While we didn’t get the level of new business we’d hoped for, we did have some great experiences together.

A funny epilogue… A year or so later, we three started eating vegan. After a month or so, when just the thought of eating meat would sicken us, the mere mention of “Stage Door Deli” would still cause us to drool!