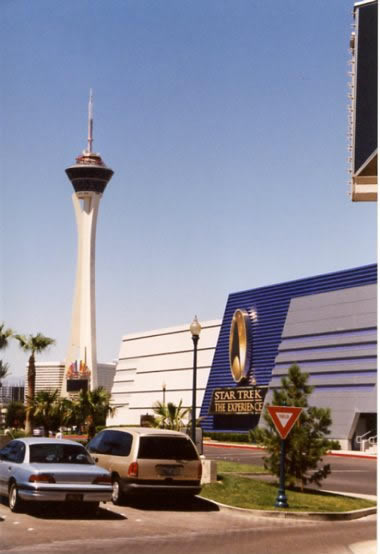 My sister-in-law’s sister worked in Las Vegas for a while as a project manager setting up the Star Trek Experience exhibit. If you never got the chance to see it before it closed in 2008, it was a pretty cool thing setup in the Las Vegas Hilton.

They had a an exhibit area which doubled as the line for the ride – an immersive 4-D deal with Klingons and Borg. They also had a DS-9 promenade complete with shops and Quark’s bar, and various actors walking around in costume and interacting with the patrons.

In the entrance area, they even had replicas of the shooting models they used for the various Enterprise ships.

It was pretty cool.

Anyway, when it was being constructed they had some issues with the exhibit part so Linda came in to get things back on track. She had tons of props and costumes and such to work with, and when her own Trek knowledge was insufficient she’d consult with fans she knew (like her brother in law, aka my brother Joe.)

Once everything was in place, they held their grand opening where Linda got to meet several of the actors. She even gave Sir Patrick Stewart a hard time for breaking the Borg Queen’s spine so severely – it made it much harder to put back together for display.

So one year when Mary and I visited Las Vegas Joe met us there, and we all got to check out Linda’s masterpiece. Having Joe along meant, of course, plenty of pictures (only a handful of which I’ve included here.)

The props and such were scattered throughout the line, but in some areas the costumes were grouped together. So, there was a section for Vulcan costumes, Borg costumes and props, and others.

In the Klingon section, they had the costumes for the Duras sisters hanging on regular mannequins. Now, anyone who’s watched the Next Generation knows that these sisters outfits boasted their ample cleavage, but the mannequins just weren’t up to the task.

Knowing that fans would immediately see (and point out) the error, Linda bravely volunteered her own torso to make a mold to “prop up” the costumes properly.

Thus, as Joe pointed out, thousands of fans would travel millions of miles to stare at Linda’s chest.

Oh, the things people do for science fiction fans…

We did the exhibit thing and then did the ride thing. (Part of it was cool – we boarded an elevator, during which we were caught in a transporter beam and sent to the Enterprise. It sounds weird, but it kind of worked.)

Afterward we wandered around the Promenade and toured the shops. It was a fun afternoon that I’d repeat in later trips with Diane and Mary’s cousin John.

Addendum: One of the Promenade shops had a large-screen TV that played Star Trek clips on a continuous loop, in addition to branded clothing and various other souvenirs. So I was progging about the place checking out stuff, and I noticed one of the clerks folding T-shirts and muttering to himself. When I stepped closer, I realized he was echoing the dialog on the clip-loop. Our eyes met, and as I started chuckling he whispered, “Help me…”