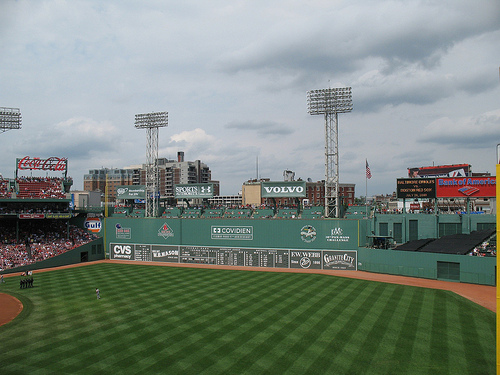 Back in the late 1980’s, a friend from the Boston area invited a handful of us to visit. We accepted, and a short four-hour drive later we pulled into Beantown.

We enjoyed a great lunch at a non-tourist seaside restaurant, where I ate my first lobster. (Tasty, but too much work.) We did a bit of sightseeing, including Harvard Square (which is “properly” pronounced without any Rs, for some reason.)

The highlight of the trip was a doubleheader at Fenway.

Now, I was born in NYC and a die-hard Yankees fan. But, I’m enough of a baseball fan to appreciate baseball cathedrals like Fenway. (Wrigley, too, but I told that story already.) It’s an old, tired looking stadium that’s seen it’s share of historic times and players. It definitely has character, and some really bad seats.

(Years later I had an opportunity to revisit Boston and picked up a ticket to a game. The bastard at the ticket counter put me behind a giant steel pillar. “Partially obstructed viewing,” they called it, which meant that you could clearly see everything except 90% of the field. Maybe I shouldn’t have worn my Yankees cap…)

Anyway, we picked up tickets to a doubleheader vs the Milwaukee Brewers, back when they were still in the American League. That season the Sox were doing well, having come out of the All-Star break on a winning streak still going when we got there.

They were great seats in the right-center field bleachers, and the Sox were at bat. We were enjoying a beautiful day at the ballpark.

When we noticed something on the field by the centerfield wall.

It was just sitting there, watching the game.

And the Brewers centerfielder kept turning around to check on it.

Being concerned and empathetic citizens, we started chanting…

The centerfielder kept looking back.

We kept hoping the batter would hit one to deep center, because the centerfielder wasn’t going to chase it.

Eventually, the rat got bored with the game and vanished. The Sox won two.