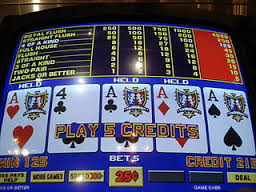 As I mentioned, my in-laws moved to Las Vegas many years ago, and as locals they quickly learned where to find the good stuff. For example, while everyone knows about the big casinos – the Mirage, Caesar’s Palace, the Bellagio – the locals can tell you the places to go where winning is a bit easier and the buffets are nicer.

For my in-laws, the best place to go gambling was a little place called Jerry’s Nugget. Not the biggest casino, it wasn’t even on the strip. But, it had some good games and the machine were a bit looser there. My mother in law had many successful evenings at Jerry’s, and they all swore by it.

So there was this time we went to Vegas, and I had a free night so I went with “Baby” Aunt Nora to Jerry’s for some video poker.

So we’re sitting side by side playing video poker, and chatting about whatnot, when I get dealt a full house – one pair and three of a kind, for the uninitiated. Aunt Nora is happy for me.

I tell her, “You know, I always wanted to throw away the pair and go for four of a kind…”

And I did, I kept the three of a kind and tossed the pair.

And I got four of a kind.

Aunt Nora couldn’t believe I got it, but I think she had a harder time believing I tried it to begin with. It was lots of fun.

I got another full house…

I smiled at her, and she looked at me like I was crazy. “No!”

“But think of the great story I’ll have!” I said.

And I did, I kept the three of a kind and tossed the pair.

And I got… nothing.

But I did get a story.